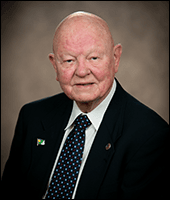 District 8 boundaries: I-74 southwest to Bradley Park and City of Peoria limits (PDF)

Born in Peoria, Phil received his B.S. from Bradley University and completed his Master's Degree at the University of Illinois. After teaching in an agricultural community near Champaign, he returned to Peoria and spent over 30 years serving District #150 at Peoria High School.

Respected in his profession, he has held various positions in teaching and coaching. Before serving a term as President of the Peoria-Pekin Social Studies Association he held other offices in the organization. He was chairman of the Social Studies Department at Peoria High School for 16 years. For 33 years, he has been an officer in the Illinois High School Football Coaches Association. From 1978-2004, he was on the IHSA Track and Field Advisory Committee. He became the first chairman of the Girls and Boys committee when it was combined. For 14 years, he was Meet Manager of both the Girls and Boys State Meets.

Actively involved with the community, he has been a member of many boards. He served on the Alzheimer's, Peoria Zoning Commission and the original committee which brought "March Madness" and the IHSA State Basketball Tournament to Peoria in 1996. Presently, he serves on the following boards or commissions: Exposition Gardens/Heart of Illinois Fair, Peoria Convention Bureau Sports Commission, Labor Council of West Central Illinois, Greater Peoria Area Sports Commission, and Old Timer's Baseball Association. Recognized twice as Teacher of the Year, he has been honored numerous times. Phil was named Illinois High School Track and Field Coach of the Year in 1974, and the recipient of the prestigious "Ray Eliot" Award in High School Football. He has been the honorary referee for the Girls and Boys State Track and Field meets as well as honorary referee at the state Cross Country event. Other awards he has received have come from the Peoria Officials Association, Greater Peoria Football Coaches Association, Labor Council, National High School Athletic Coaches Association, Illinois Track and Field and Cross Country Association and IHSA for Meritorious Service.